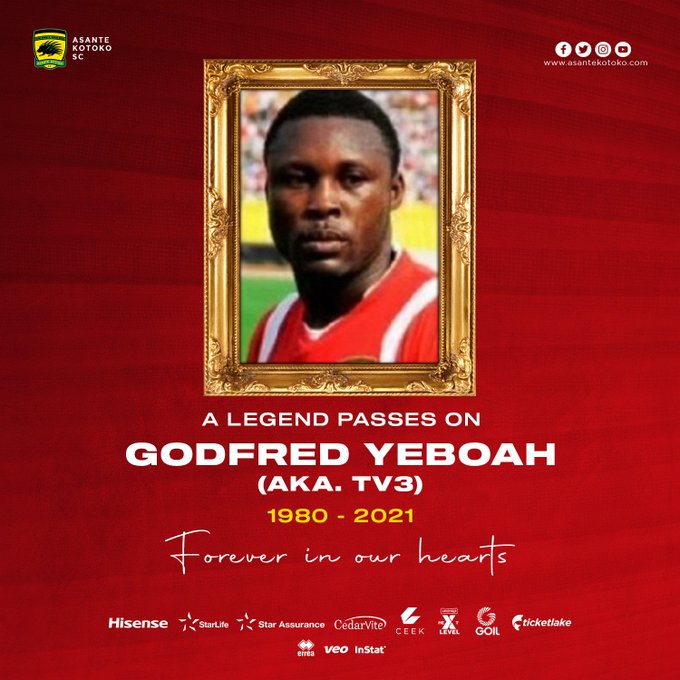 Yeboah was confirmed dead on Tuesday morning at the age of 41.

The club, in a statement on its official handle, said: “We’re saddened to hear of the passing of Godfred Yeboah who represented us from 2001 to 2009.

“His passion for the club was undeniable and he will be missed.

“We send our condolences to his family, friends and everyone.”

Yeboah, who is a former Black Stars defender, was a member of the Asante Kotoko squad that clinched the Ghana Premier League title in 2003 to end the club’s 10-year trophy drought.

He was loaned out to AshantiGold SC and Wa All Stars (now Legon Cities) in 2007 and 2008 respectively.

Yeboah also had four caps for the senior national team of Ghana including a 2006 World Cup qualifier against DR Congo.

The Sunyani-born guided Asante Kotoko to win the 2008 President Cup on his return from a loan spell at Wa All Stars (now Legon Cities).

Yeboah featured for Asante Kotoko from 2001 to 2009 and holds a legendary status at the Ghanaian giants.

He was popularly known as ‘TV3’.