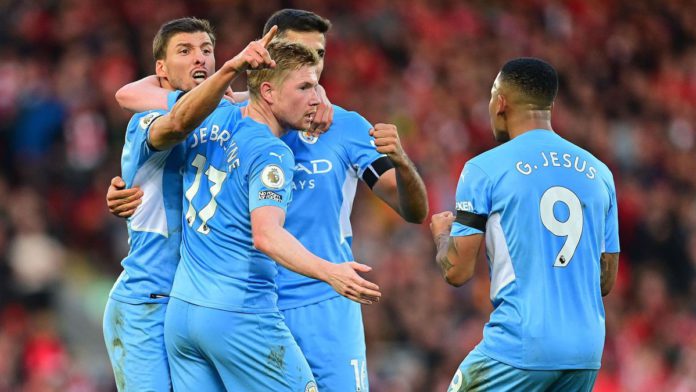 Phil Foden and Mohamed Salah lit up Anfield as Liverpool and Manchester City draw 2-2 in a pulsating Premier League fixture that swung both ways.

Salah’s Goal of the Season contender looked set to send Jurgen Klopp’s team back to the top of the table before Kevin de Bruyne’s deflected strike with nine minutes left gave City a share of the points.

City dominated the majority of the first half with Foden giving James Milner a tough time down the left-wing. It was from this source the visitors nearly scored the opener after 21 minutes when Alisson Becker denied the England international.

De Bruyne also spurned a good opportunity, heading over the crossbar when he should have at least hit the target, as Liverpool struggled to match Manchester City’s intensity and energy.

However, the dynamic shifted in the second half when Sadio Mane slotted home after being played through by Salah who skipped past Joao Cancelo before splitting open the City defence.

The away team responded just 10 minutes later with Foden fired a low strike into the bottom corner of the Liverpool net after good play by Gabriel Jesus on the edge of the box.

Liverpool regained the lead when Salah beat four City defenders before finishing brilliantly before de Bruyne restored parity once more with a strike that beat Alisson thanks to the aid of a deflection off Joel Matip.