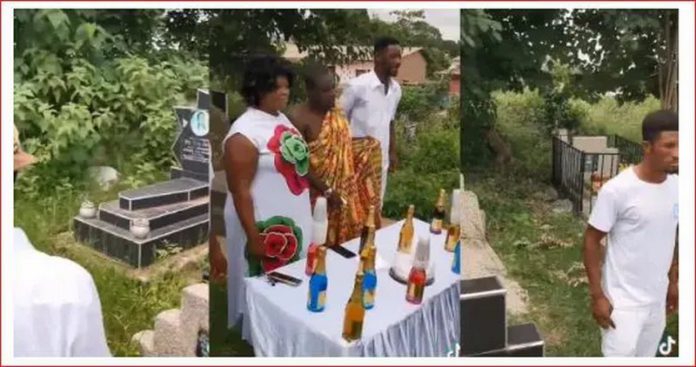 Kumawood actor, Samuel Nkrumah’s quest to celebrate his birthday in an unconventional way has landed him in trouble.

The young actor marked his special day at the cemetery and also arrived there in a coffin to cheers from family and friends.

Now, Samuel Nkrumah claims he is being haunted by ghosts.

“When I sleep, I feel I have left my body; I see ghosts in my room. I really need help” he said in an interview with GhPage.

Even worrying, Samuel Nkrumah claims is the decision by his pastor not to help him since he defied his order not to hold the birthday party at the cemetery.

“I have called my pastor but he is not picking up my calls; please pray for me” he appealed.

The situation, Samuel Nkrumah stated is having a negative impact on his relationship.

“I brought out a ring to propose to my girlfriend but the moment I said will you marry me?, she collapsed” he narrated.

The young actor said he chose the cemetery because he wanted to do something unique but now “I have bitten more than I can chew”.