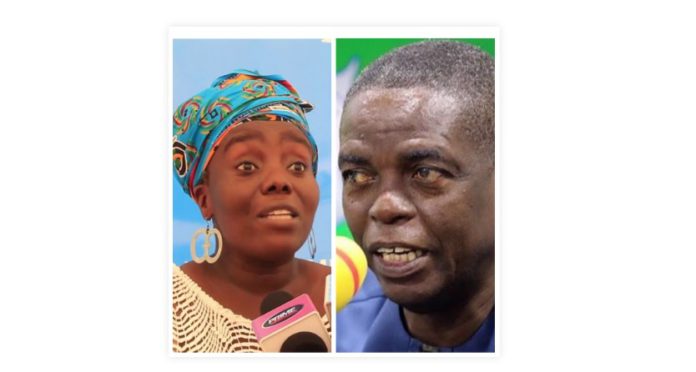 Last Thursday, in a submission during a Founders’ Day discussion on Pan-African

TV, you likened Danquah’s role in the independence movement to an officer of a political party in today’s Ghana. Thankfully, you are not an authority on Ghanaian

History. As such, it is a huge relief that we can rely on those whose body of work has helped shape the narrative on Ghana’s recent historical past to glean a clearer picture of Dr. J.B. Danquah’s connection to the UGCC.

For starters, this is how the formation of UGCC is documented in British

United Gold Coast Convention.”… At present, the movement finds its main supporters in the large coastal towns of Accra, Saltpond, Cape Coast, Sekondi and in Kibi, the home of Dr. Danquah, the mainspring of the movement.”

See: Kenneth Bradley to Arthur Creech Jones (Secretary of State for the Colonies),

Dennis Austin, one of the pioneering historians on Ghana’s recent past, in his seminal article on the Working Committee of the UGCC posits:

“The idea of a new political movement was almost certainly Danquah’s. He was associated with several quasi-political bodies – representative on the Cocoa

Marketing Board for the Colony Farmers’ Union, legal adviser (February I947) for the Ex-Servicemen’s Union, secretary of the Youth Conference movement as well as the Joint Provincial Council’s representative on the I946-50 Legislative

Council. Something was wanted to tie these different bodies together, to replace the antiquated Aborigines’ Rights Protection Society, and re-direct the enthusiasm of the new moribund youth movement. The idea of a new

A. G. Grant’s ‘old offices at Poassie Road, Sekondi, in conference with three friends – Williams, Blay and Danquah. By April, the idea had germinated in a special conference held at Canaan Lodge, Saltpond, of about 40 representative leaders and after months of preparation and propaganda the United Gold Coast

Convention was launched at Saltpond on 4 August with Grant giving the inaugural address.”

During the formal inauguration on August 4 1947, national officers for the UGCC were elected. How did Danquah’s election as a representative of the Eastern

Province take away from him being the brains behind the formation of the UGCC?

President Nkrumah, on whose behalf it appears you continuously make demeaning remarks about Danquah, found Danquah worthy of praise. On March 12 1952,

Nkrumah publicly acknowledged Danquah’s contributions to Ghana’s nationhood by paying tribute to him and other leading statesmen in the Legislative Assembly:

“Mr Speaker, I am not far from forgetting the debt we owe the leaders who are still happily with us: of Kobina Sekyi, of George Grant, Henley Coussey, Leslie

Speaker, let us give them due in spite of the singular achievement of the CPP and let us pray that they will all wish us well in this move on the part of the Gold

And now to answer your question: “Which elections did JB Danquah ever win?”

Coast, Danquah won an election to become a legislator in the Legislative Council of

In June 1946, Danquah was one of the 19 candidates nominated for the five seats of the Eastern Province on the Legislative Council, under the auspices of the Joint

Provincial Council of Chiefs. This was in line with the provisions of the 1946 Burns

Constitution which gave the Gold Coast an African-dominated Legislative Council for the first time in its history. Danquah made an appeal to the chiefs to consider his service to them since 1916 and after a keen contest, he was elected Third Provincial

Member of the Legislative Council.

In 1951, Danquah stood on the ticket of the UGCC for the Akim Abuakwa Central seat in the general elections. He WON that election, thereby becoming the First Rural

Member for Akim Abuakwa Central in the Legislative Assembly.

It is, therefore, a palpable falsehood for you to state Danquah never won an election and that “even in his hometown in Kyebi, they voted against J B Danquah.” when, in actual fact, they elected him as their representative for the 1951-54 Session of the

Furthermore, the Legislative Assembly Debates featuring both Nkrumah and

Danquah in the Legislative Assembly between 1951 and 1954 make some interesting reading and are a rich source of Gold Coast history and it is quite alarming they have escaped your radar so much so that you have resorted to peddling such unfortunate mistruths.

To appreciate Danquah’s work as a legislator, this is a tribute in his memory by K.B.

Parliamentary Counsel went over their drafts with a fine-tooth comb, the

Minister did his homework, and the Clerk sat at the table with suspended animation. During words of heat he stood his ground with poise and gave blow for blow with the scornful efficiency of a perfect marksman. His style in debate was great, his power of analysis formidable. He was interested in everything, not just the big fundamental issues. While he was pre-ocuppied with the question of self-government, he asked questions about the mosquito menace in Accra… Joseph Boakye Danquah- pioneer, philosopher and philanthropist; scholar, lawyer and jurist; statesman, politician and parliamentarian; poet, writer and journalist; sage, hero and martyr – nothing I write could be worthy of him!”

And then, what really does winning an election prove? You lost the parliamentary elections for the Ayawaso Central seat in 1996. How does that take away from your contributions to Ghana’s development? How many elections did Yaa Asantewaa win? Or King Aggrey? Or Nana Sir Ofori-Atta? Or Hannah Cudjoe, a livewire of the CPP or Gladys Akua Eunancy Dagadu, the founder of the Ghana Girls Brigade?

Ironically, today, the CPP is comatose. And the NPP and the Wontumis of this world are the leaders in our political space. Does that make them more successful than Joseph Amoah who won Ghana a Commonwealth medal for the 200m last

Friday, after some 48 years? Or the kids at Mamfe Methodist Girls School who put

Danquah served Ghana well and has paid his dues and he will forever be remembered by posterity, if for nothing at all, for giving our country Ghana its name.

With regards to Ghana’s name, a matter in which you have previously erred with your ‘historical contributions’, here is an excerpt of an article by Danquah’s ex-wife and CPP MP, Mabel Dove which appeared in the Ghanaian Times of April 15,

“Their sole motive in pushing themselves into political power was gain and profit. Now stripped of their masks of office and reduced to their own natural size what a poor specimen of manhood and womanhood they are, a disgrace to Ghana, no wonder they connived with their master the arch-criminal to kill the man who, through his research, named them Ghanaians. Ingratitude thy name is disbanded CPP”

See: Mabel Dove, “The Coup was a Healing Tonic”, The Ghanaian Times, April

Considering that Mabel Dove Danquah was more of a journalist and sometimes journalists’ views can attain the heights of vile rhetoric, find below some quotes from the scholarly text on how the name Ghana came about.

“One legacy of this early period is almost certainly Danquah’s: the invention and popularization of the name’ Ghana’. ‘I conceive’, he wrote to the Watson

Commission on 15 April 1948, ‘that the first act of the constitution-making body will be to make a clean break away from the memories of the old days of exploitation and imperialism, and the colonial adjective Gold Coast will give way to the substantive name of the people and country, Ghana and

In Thomas Hodgkin’s, Towards Self Government in West Africa, published in

1953, the year you were born and some four years before independence, he credits

Danquah with the name:

“More recently the work of Dr. J.B. Danquah has had considerable influence.

Coast originally came to their present homes from Ghana, the empire North of the Niger which flourished from about the fifth century until the thirteenth century.”

See: Thomas Hodgkin, ‘Towards Self Government in British West Africa,’ in The

A more recent acknowledgement of Danquah’s role re: Ghana’s name is found in a biography written in 2004 by Professor Richard Rathbone, a respected authority on

Ghanaian history and of School of Oriental and African Studies fame:

“He remained in Britain until 1936, spending much of his time in the British

Museum’s reading room researching African history. That research led him to the conclusion that the Akan, his own ethnic group, were the relicts of the ancient empire of Ghana. This argument gained local currency eventually and led to an independent Gold Coast choosing to be known as Ghana from

Regarding your assertion that “only people who don’t know our history can be pushing Danquah as a national hero”, I leave you with what others made of his contributions in his lifetime and after his death.”

In the March 1957 edition of the West African Review:

“J.B.’s place in Ghana’s history is assured, even though, in the end he never held power. His long list of scholarly writings on Akan customs, his Twi play, his pamphlets and occasional writings would ensure that. But he was, too, at the centre of Gold Coast politics at a crucial time; he was a leading member of the Coussey Committee, appointed in 1949, and his contribution to independence is significant. Above all he is the man who, more than anybody else, argued the case for calling the Gold Coast “Ghana”, a case based on careful study in the British Museum. Is that not enough to justify the title “a great Ghanaian?”

Professor D.M. Balme, the first Principal of the University College of the Gold

Coast, (now University of Ghana) said of him:

“J. B. Danquah was unquestionably one of the greatest men of Ghana and indeed of all Africa…he was wise and kind, he was a devout patriot and fervent nationalist…his greatness transcended national and racial barriers. It was his vision more than anyone else’s that prepared the way for modern Ghana.”

Archie Casely-Hayford, son of Joseph Ephraim Casely Hayford of NCBWA fame and Nkrumah’s close CPP ally in the independence struggle made this tribute:

Few men in our time and age have made a greater contribution to the advance of their country than that made by the late Dr. J. B. Danquah. For selflessness, self- sacrifice and devotion to duty and to an ideal, it was hard to find his equal… He would not have wished otherwise than to have laid down his life for Ghana. With other heroes of Ghana his spirit remains imperishable ever to inspire all true Ghanaians.

Sir, your dislike and deep-seated contempt of Danquah is a cross you have chosen to bear and no one can begrudge you that. However, in carrying that cross, it would be prudent to stick to the historical facts as much as possible. There are many of us young people who look up to you and the direction you give us today is what would help guide and shape us into better Ghanaian citizens for the future. Irrespective of whether we win any parliamentary or presidential elections or not. Or whether we can aspire to and attain the Regional Chairmanship of a political party.