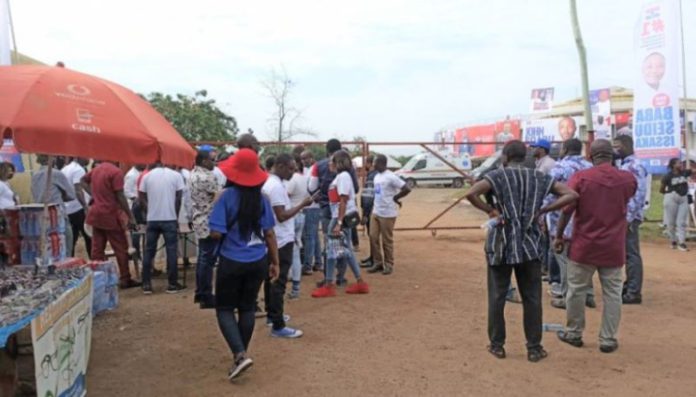 The New Patriotic Party (NPP) is strictly enforcing a “No Accreditation, No Entry” policy at the International Trade Fair Centre, where more than 650 delegates will be gathering to elect officers to steer the affairs of the Party in the Greater Accra Region.

Delegates, observers and media personnel who fail to show their accreditation are not allowed into the Fantasy Dome, the auditorium where the elections will be held.

To prevent the falsification of accreditation, all accreditation cards have been embossed with barcodes, which are scanned by security officials before one is allowed to enter the auditorium.

Party officials told the GNA that the policy was to prevent impersonation and enhance security at the venue.

Meanwhile some delegates said they were yet to receive their accreditation.

The Party officials said efforts were underway to print accreditation for all the delegates.

There is also heavy security presence within and around the auditorium as police officers are positioned at vantage points to maintain law and order.

Hundreds of delegates, observers and party faithful have gathered at the Trade Fair ahead of the contest, expected to take-off by 11 a.m.

The atmosphere is already charged with supporters of some aspirants (including aspirants for the upcoming national elections) marketing their candidates to the delegates.

Some traders have also pitched camps within the Trade Fair Centre to conduct brisk business. They are selling items, including NPP paraphernalia, food, dresses, perfumes, and beverages.

A total of 665 voters, comprising 561 delegates, 10 Council of Elders, 10 Council of Patrons, 1 Founding Member, and 52 TESCON Members, will decide the fate of the 34 aspirants on Saturday.

The Chairmanship position, which is being keenly contested, is a two-horse race between the incumbent, Divine Otoo Agorhom, and Alfred Tiase Boye, a former Acting Greater Accra Regional Chairman.