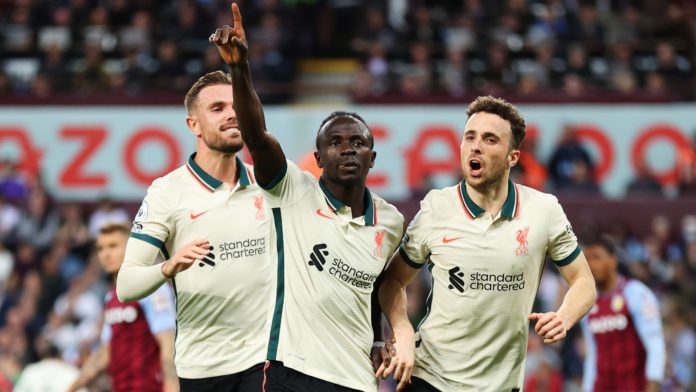 The Senegalese hitman headed in his 22nd goal of the season 25 minutes from time to keep the heat on their rivals at the summit after Steven Gerrard’s Villans had given the Merseysiders a real scare.

The visitors were much-changed from their weekend draw with Tottenham and they paid the price for a chaotic start defensively as Douglas Luiz fired in a rebound inside three minutes.

Villa returned the favour with some of their own comical defending just three minutes later as Joel Matip stabbed in from close range.

Both sides then wasted opportunities with Danny Ings and Mane heading wide in an absorbing end-to-end contest.

Liverpool, who started with Mo Salah on the bench, improved and took greater control of the proceedings after the break with Mane securing the crucial breakthrough.

Villa had chances to level but Alisson made a great stop to keep out former Reds striker Danny Ings.

The result means Liverpool now trail City on a goal difference of -3 but City can restore their three-point advantage with two games remaining if they win at Wolves on Wednesday night.

Next up, Liverpool face Chelsea in the FA Cup final on Saturday but there will be concerns over the fitness of Fabinho who was withdrawn in the first half with what looked like a hamstring issue.

Villa, who remain 11th, are in top-flight action at home to Crystal Palace on Sunday and remain firmly in the hunt for the top-10 finish Gerrard is targeting.