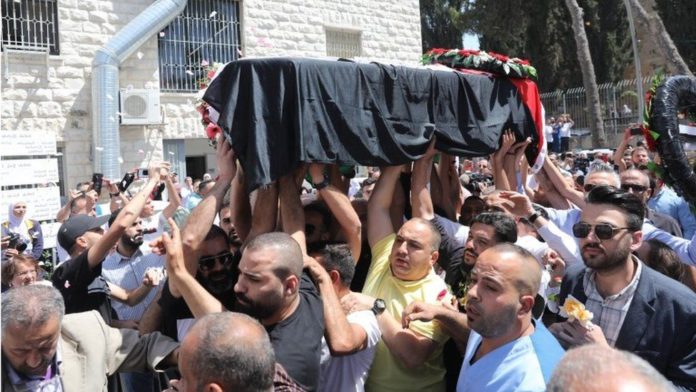 Large crowds have gathered at the funeral of reporter Shireen Abu Aqla, killed in disputed circumstances in the occupied West Bank.

It is taking place in East Jerusalem amid heightened Israeli security.

Abu Aqla, who worked for Al Jazeera, was shot dead on Wednesday while reporting on an Israeli operation in the city of Jenin.

The killing sparked widespread condemnation, with Israel and the Palestinians trading blame.

The Palestinian Authority and Al Jazeera claimed Abu Aqla was shot dead by Israeli forces, while Israel said it was not yet possible to determine what happened and that she could have been killed by Palestinian gunfire.

The Palestinians refused Israel’s request for a joint probe, saying they did not trust the Israelis. Both sides are carrying out their own investigations.

The BBC’s Tom Bateman in Jerusalem says there is growing pressure for a fast and transparent inquiry into Abu Aqla’s death. He says a focus is emerging on the bullet that killed her, recovered during the post-mortem but reportedly of a type used by both Israeli soldiers and Palestinian gunmen.

The Israeli military released interim findings on Thursday, which said it was not possible to determine the source of the fatal shot.

The report said it could have come from “massive fire from Palestinian gunmen”, or possibly from “a few bullets” fired by a soldier “at a terrorist who was firing at his vehicle”.

Shireen Abu Aqla, a 51-year-old Palestinian American, was a veteran correspondent for Al Jazeera’s Arabic news channel and had reported on the Israel-Palestinian conflict for two decades.

She was given the rarity of a funeral at the compound of Palestinian President Mahmoud Abbas on Thursday, where her coffin was brought draped in the Palestinian flag. President Abbas paid tribute to her, describing her as a “martyr of the free word” who “sacrificed her life” to defend the Palestinian cause.

“We hold the Israeli occupation authorities fully responsible for her killing and they will not be able to conceal the truth with this crime,” he said.

He said he would refer the case to the International Criminal Court, which investigates potential war crimes.

There was no immediate response from the ICC or the Israeli government to Mr Abbas’ stated intention. Israeli Prime Minister Naftali Bennett has accused Mr Abbas of “throwing blame at Israel without any basis.”

Abu Aqla was wearing a blue flak jacket, clearly marked with the word “Press”, when she went to the Jenin refugee camp early on Wednesday to report on the Israeli raid. The Israeli military said the operation was to apprehend “terrorist suspects”.

It said “tens of Palestinian gunmen fired at and hurled explosive devices toward the soldiers. The soldiers responded with fire toward the gunmen and hits were identified”.

Another Palestinian journalist, Al Jazeera producer Ali Samoudi, was shot and wounded during the violence.

The incident comes at a time of particularly high tension between Israel and the Palestinians, after nearly two months of one of the deadliest periods of violence in years. Israel has carried out operations in Jenin in the wake of a wave of killings of Israeli Jews by Palestinians and Israeli Arabs in Israel and the West Bank.

Four of the Palestinians who carried out attacks in Israel came from the Jenin district.