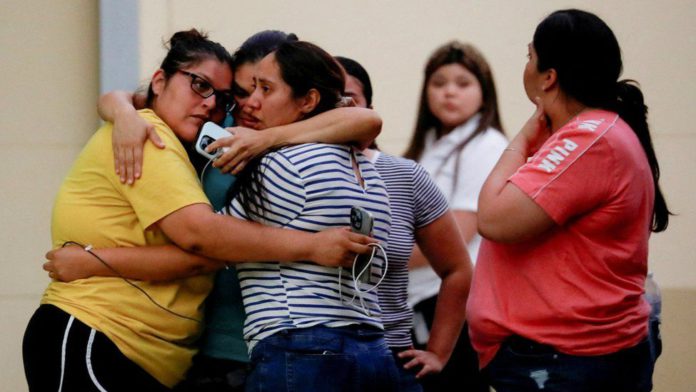 Salvador Ramos began playing “sad music” as he gunned down two teachers and 19 children in Tuesday’s school shooting, a young survivor has revealed.

The twisted teen shot his own grandmother at their home in Uvalde, Texas before driving to Robb Elementary School to carry out the massacre.

Miah Cerrillo, 11, was inside one of the classrooms he targeted and survived by smearing herself in her friend’s blood and playing dead.

The brave schoolgirl has since shed more light on how the horrifying incident unfolded, saying her class had just finished watching the 2002 Disney film Lilo & Stitch when their two teachers, Irma Garcia and Eva Mireles, got an alert about an active shooter.

One teacher ran to close the door but was intercepted by Ramos, 18, who blasted his way into the classroom.

Miah told CNN she watched Ramos lock eyes with the brave woman before saying “goodnight” and shooting her dead, before killing the other teacher in the room.

The gunman shot several other children before walking into the adjoining classroom where he kept firing rounds and loudly began playing sad music which Miah described as “I want people to die” music.

While he was in the other room Miah and a friend desperately called 911 using their dead teacher’s mobile phone, begging for the police to come and help them.

She then used the blood from another classmate who had just been killed to rub over herself so it appeared she had also been killed, and lay still on top of them.

It took police over an hour to finally burst into the school and kill Ramos, an achingly slow response which has been widely condemned by parents of the victims as well as Texas governor Greg Abbott who said he had been “misled” about their response to the emergency and was “livid”.

On Thursday Department of Safety Lieutenant Chris Olivarez said his unit failed to storm the classroom where they knew Ramos was killing schoolchildren because they “could’ve been shot”.

It took police officials until Friday to finally admit they had “made the wrong decision” after videos went viral showing desperate parents being handcuffed as they begged officers to save their children.

Miah is now “extremely traumatised” from her near-death experience but “wanted to share her story so people can know what it’s like to live through a school shooting”.